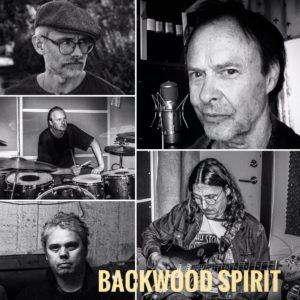 Backwood Spirit was founded in Örebro, Sweden, by guitarist and songwriter Kent Engström. After writing and doing demo recordings of songs with different musicians, Engström teamed up with long time music companion and drummer Joje Lindskoog (Crossroad Jam, Waving Corn) to put a band together.
In late 2015 the two joined forces with vocalist Göran Edman (Yngwie Malmsteen, John Norum) to start the recording of an album. Tobias Åslund was brought in for the organ and keyboard-work in the studio, along with Niclas Boson on bass. The bands self titled first album was released 2017.

Later on Boson became a member of the band, but is now replaced by Mats Berglund. The line-up was completed with Peter Emilson, also with a past in Crossroad Jam, on keyboard.

When drummer Joje decided to leave the band in 2018, he was replaced by Binge (November, Mårran) for a period of time. 2020 and Joje is back behind the drums and together with the rest of the gang they now completed the bands second album, “Fresh From The Can”. Released April 2021 on Pride&Joy Music

In the style of classic rock and bluesy hard rock, the music of Backwood Spirit is reflecting the musical roots of the members.